Musically, It’s an RnB and Hip-hop song. The song has a cool undertone while 0woo’s rapping gives it a sharp edge. The bell is the most ominous sound amongst all. A lot of dark sounds like electric piano and strong bass guitar make it a very interesting piece. The tone of Rang’s voice makes the song sound yearning for something unachievable.

It is an art masterpiece. It depicts a lot of emotion through imagery.  From burning wood, abandoned and empty forests, all flickering candles’ flames and rustling flowers to raindrops on the window, empty banks, flowers reducing to the buds everything points to a mental state of conflict and loneliness.

These turn into dark actions towards the end of the video such as burning a human mannequin, being blindfolded in a small space and towards the end the letting the chaos happen everything becoming wobbly with a surge of demonic essence in everything.

The black, white and grey tones make a very monochromatic palette until the end where everything is a bright red. The end seems like a very strong condemned emotion rising on someone’s inside.

It talks about getting forgiven by someone. One is always fighting their own demons. At times there are you have to face off with these demons and burn them with the fire of forgiveness that lies within you.

Listen to the full album on Spotify here!

Let us know what you think in the comments below! 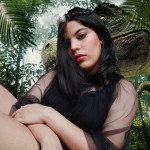