Kim Eun Mi or better known as Grazy Grace is a Korean American singer/rapper and songwriter. She had debuted on February 5, 2016, with the single “I’m Fine“.

Grazy Grace took to fame from MNET’s reality show ‘Unpretty Rapstar’ Season 3 in the year 2016. Although she was eliminated in episode 8 of the show, she indeed left her mark in the same and came out as a well-known content creator in the entertainment industry.

She seems to be an all-rounder; she is credited for her YouTube channel, she is a music composer, a commercial writer, and singer, etc. She is known to have sung for several famous artists such as BLACKPINK, Krystal, etc. in their commercial advertisements.

We at Hallyure had the opportunity to interview the amazing talent – Grazy Grace and delve more into her “Planet“.

Would you kindly please introduce yourself to our readers?

Hi! This is Grazy Grace, singer-songwriter, influencer, and just a curious girl on this Earth.

We have known you since your participation in Unpretty Rapstar Season 3, how did you happen to join the show?

I’ve gotten the opportunity after the producers heard about me through another contestant. She happened to be a contestant on season 2 who saw my first music video!

Then I auditioned several rounds until I was picked.

How has the journey been since after the show?

It’s been difficult at first, but I’m doing amazing. I’ve gone through a lot in terms of being in the industry, meeting lots of people, good and bad situations.

I’ve became my own artist/influencer creating diverse content for my audience and I”m loving it!

How did you get into making music as your career?

I always wanted to be in the entertainment industry ever since I was young. It’s something that I always gravitated towards. Then I discovered Kpop (TVXQ) at 13, and ever since then I wanted to represent my country. I started practicing hard, and never giving up since then.

Being an independent artist means you got to go where people are. People are on ‘online’ these days, and in the future as well. Having my own power and being my own boss is a great feeling, and YouTube, Instagram, social media allows you to do that. You truly become a ‘creator’.

I wanted to represent my country and my roots. A great way to do that is to introduce it to people with music and entertainment. I’m proud to be Korean and share the Korean industry with the global audience. Not to mention, I’ve been through the industry so I can give my own insight, tips, and entertaining things to talk about.

We have come across several commercial writing of yours, in the manner of jingles and otherwise, how did you get into the same?

I met commercial songwriters through other musicians, and I sang for them once in a commercial. They liked my voice, and ever since then I was called for several commercials.

Speaking English, knowing how to write lyrics, rapping, singing, all is a plus that contributed to it.

You have had the chance to participate in singing jingles for commercials where BLACKPINK was featured, how did that come about?

The producers that I work with receives a lot of many different request from brands. Couple of them happen to be big artist and I had the privilege to saying and rap for them.

Let us talk through your latest release ‘Planet’, how did the inception of the title come about?

I’ve always been into fantasy and I wanted to write a song that represented my situation at the time in a fantasy way. I believe there are trillions and trillions of planets out there and each of our creativity/brain is just like another planet. I feel like in the world, many times we don’t respect other peoples ‘planets’ and try to dictate someone else’s life. So I wanted to write about my real situation, where I’ve felt like I was being controlled and manipulated by the wrong people. I’m sure many people can relate to this

Could you walk us more through ‘Planet’, what was the inspiration for writing the same? How was the overall production process like?

A friend producer sent me a dark fantasy beat one day, and it wasn’t usually the style that I usually would go for but else going through a hard time back then and I think that is why I was easily able to write the lyrics. Unfortunately, my friend producer ended up passing away and I knew that I had to release the song. I got an opportunity to perform in Sweden, met up with my friend who is a videographer, and we ended up making a simple video for ‘Planet’. It was very cold that day and I didn’t have many staff members to help us out, but it was such a liberating experience. It was the first-ever project that I’ve done on my own.

What would be your personal opinion on the pros and cons of being an independent artist in a competitive market, such as the Korean music industry?

Pros are that I get to be my own boss and be as creative as I can. You are also able to earn your own revenue and not be in debt to someone else/company. I feel like there’s a lot of trust issues when it comes to working with companies.

The con would be that you are your own supporter so it’s difficult having a big budget for music videos or promotions. You need to promote your own self and that takes time to build. Getting the right connections is also difficult sometimes. But I was able to meet the right people and I am so glad that I m working with an amazing team.

How would you describe your music than the other artists in the industry?

I want to be the bridge between the West and Korea. I believe that through music I will be able to expand globally. A fuse between a Korean influence with the Western side is what I believe can bring something fresh and addictive. I also rap and sing, and sometimes I like to call that ‘SAPPING’ when you are not quite singing nor rapping but doing both at the same time.

Amongst your previous and recent music releases, which one would you say may be your favourite? Is there a special episode for the same that you would like to share with our readers?

I cherish all of my past work and got to work with amazing creators. My favorite will always be the most recent music so for now I will say “Planet“. I have an amazing song that is targeted towards the western audience and I hope to have that released in the near future. I’m confident to say that will be my and the fan’s new favorite song.

What do you usually do in your free time, especially with the pandemic, how has life changed?

I’m sure a lot has changed for everyone. I usually work at home and have got into many different aspects of creativity, such as in more beauty, researching, Learning, and trying to grow myself as a powerful person that can offer something great to the world! I also started connecting with nature more and it feels great.

Who is your favourite music artist at the moment and what are your go-to songs in your daily playlist, if any?

It’s hard to say that one has a favorite musical artist these days. There are so many great artists nowadays, as creating music and releasing is made easy and possible for everyone. But I do respect Doja Cat, and I liked her before she blew up on TikTok! Her music and the confidence presence inspires me.

Can we expect for any new music releases from your end in the near future?

Yes of course, and like I said it’s going to be my new favorite song. I guess you can call it a ‘ U.S’ debut, but with a little Kpop spice to it.

Any message for Grazies? Especially for people who are going through rough times this year?

I think about my fans every single day and I always try to communicate with them on multiple platforms. I appreciate every like, comment, and even criticisms! Life is tough for everyone and you’re not alone! But I know every struggle is another step to success, we’re all in this together! Whenever you’re feeling down, watch something and I also hope that my videos can put a smile on your face. 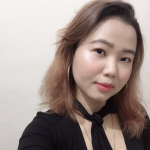